Tape Exploration in the Block Area

Over the past several weeks, the children have shown an ongoing interest in using masking tape in the block area. Initially, Sage used the tape to create clothing for an “Animal Fashion Show” and the other children were drawn to her ideas. The interest in the tape continued over several weeks and led to a wide variety of creations and experiments in the block area. As their interest continued, the children added materials to the tape, including pom poms, pipe cleaners, sequins, animals, and much more.

Over time, the block area evolved into a Christmas party, a Birthday party, a playground with swings, a trap for “bad guys” and a spider web. The children also created “armor” for the dinosaurs, clothing for the animals, and traps for “bad guys”.

Some children utilized all of the materials, while others only used certain items for their creations. The children experimented with different methods of manipulating the tape and discussed their ideas with each other and worked collaboratively. 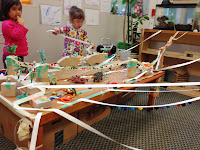 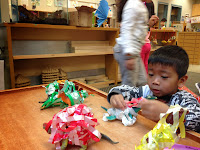 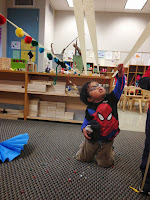 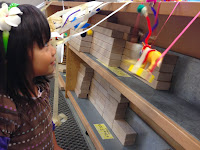 Konichiwa from the afternoon program

On Tuesday November 12, 2013, we made hand-rolled sushi maki rolls with the help from our very own sushi chef, Jenny! This fun and interactive activity allowed each child to participate in the preparation from start to finish. Making your own sushi is a great way to expose children to a little Japanese culture as well as introducing a new and healthy meal. Each child wet their fingers in a bowl of water before they began adding their sticky rice to their seaweed (maki). Then they were able to choose their fillers, which included avocado, cucumber, and cooked spam. Once their fillers were chosen, the rolling began! All of the children tried their sushi, with most of them loving it and making several sushi rolls.